Many federal government policy and regulatory issues are of importance to libraries and the people who use them. Policies related to personal privacy, library funding, workforce development, and copyright law are a few of the issues of interest to the library community. 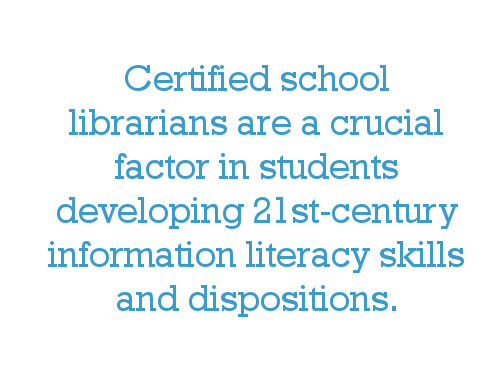 Certified school librarians are a crucial factor in students developing 21st-century information literacy skills and dispositions. Yet school libraries remain threatened with closures and reductions in credentialed staff. This dire situation highlights the importance of the 2015 reauthorization of the Elementary and Secondary Education Act (ESEA).

On April 11, 1965, President Lyndon Johnson signed the Elementary and Secondary Education Act (ESEA) into law. Title I of ESEA was designed to distribute funding to schools and school districts with a high percentage of students from low-income families. Title II was of particular interest to school libraries, as it provided grants to schools for library resources, textbooks, and other instructional materials.

The current reauthorization of this bill is the No Child Left Behind Act (NCLB), which was signed into law in 2001. Under No Child Left Behind, Title II is aimed at improving student achievement through the evaluation and training of teachers and principals. Resources for libraries are not included. Secretary of Education Arne Duncan is calling for a new ESEA that reflects upon lessons learned from NCLB. Parents, teachers, administrators, and librarians are lobbying to have language that specifically addresses school libraries in the reauthorization of ESEA.

The American Library Association recommends that the reauthorization (PDF) ensure that school libraries:

The American Library Association collaborated with other groups in several coalitions to support robust versions of the USA FREEDOM Act that would have meaningfully improved the balance between national security and the protection of personal privacy. A much weaker variation of that bill passed in the US House in May 2014; the US Senate, however, failed to bring a related ALA-backed bill to the floor for debate. With the scheduled expiration of key parts of the USA Patriot Act on June 1, 2015, including the library provision (Section 215), a major debate over privacy, cybersecurity, and surveillance law reform early in the 114th Congress is assured.

In March 2014, ALA and the Internet Archive, a nonprofit digital library, joined forces to file a friend of the court brief in  Riley v. California and United States v. Brima Wurie, two appellate cases consolidated by the US Supreme Court to permit it to examine the constitutionality of warrantless cellphone searches after police arrests. In the amicus brief, both organizations argued that such searches violate the Fourth Amendment. In June, the US Supreme Court agreed, unanimously ruling that the Fourth Amendment requires police officers to obtain a warrant before they can lawfully search an arrestee’s cellphone.

In December 2014, President Obama signed a $1.1 trillion omnibus spending bill and a continuing resolution—called a cromnibus—funding much of the federal government through October 2015. The continuing resolution was necessary due to the failure to pass funding bills by October. Programs supported by the library community received level funding or only a slight adjustment.

The Library Services and Technology Act received level funding at $180.9 million. LSTA funding is the primary source of federal funding for libraries. It was originally authorized at $232 million, but has never received funding at that level. Most of LSTA funding supports direct grants to states, which then determine how these funds will be allocated for programs such as job-searching databases, résumé workshops, and summer reading programs.

Under the cromnibus spending bill:

On February 2, 2015, President Obama sent to Congress his nearly $4 trillion budget request to fund the federal government for fiscal year 2016. This year’s request was sent several months earlier than the previous year. Although this is only the first step in the appropriations process, the request does indicate the president’s priorities for the next year.

The president included in his request $8.8 million in funding for a national digital platform for library and museum services, which will give Americans free electronic access to the resources of libraries, archives, and museums by promoting the use of technology. He requested an increase of nearly $6 million for overall LSTA funding, though grants to states would drop by $348,000. The Innovative Approaches to Literacy grant program was not funded in the proposal.

In July, President Obama signed the Workforce Innovation and Opportunity Act (WIOA), a law that authorizes public libraries to be eligible providers with access to federal funding for effective job training and job search programs. In a statement, ALA President Courtney Young applauded the presidential signing of the act and thanked Senator Jack Reed (D-R.I.) and Representative Rush D. Holt Jr. (D-N.J.) for their efforts to include libraries in the legislation. ALA will keep a close watch on the Department of Labor’s implementation of WIOA over the next year. In October, ALA hosted a webinar on “$2.2 Billion Reasons to Pay Attention to WIOA,” an interactive event that focused on how public libraries can make use of the act’s provisions.

There were some positive developments in the realm of copyright. The US Court of Appeals for the Second Circuit upheld the ruling in Authors Guild v. HathiTrust, deciding that providing a full text search database and providing access to works for people with print disabilities constitutes fair use.

In October 2014, the US Court of Appeals for the Eleventh Circuit handed down an important decision in Cambridge University Press et al. v. Carl V. Patton et al. (the Georgia State University e-reserves case). This decision emphasizes a thoughtful analysis of fair use and a rejection of the highly restrictive guidelines promoted by many publishers. Critically, this decision affirms the importance of flexible limitations on publisher’s rights, such as fair use. Overall, federal court cases continue to favor reasonable fair use rights, especially those that add value to an original work or serve a different, socially beneficial purpose.

While Congress continues to hold hearings about various aspects of copyright, the US Copyright Office and the US Patent and Trademark Office (PDF) published studies on orphan works, music licensing, and other topics to inform decision-making.

The big win occurred at the Federal Communications Commission (FCC) through the adoption of two landmark orders to improve the E-Rate program, which provides financial support to libraries and K–12 schools for advanced telecommunications services. The FCC increased the total E-Rate fund from $2.4 billion to $3.9 billion annually and made important policy changes to make it easier for libraries and schools to deploy high-speed broadband technologies and develop the network infrastructure inside their facilities. The American Library Association spent a considerable amount of time on E-Rate policy advocacy in 2014, working with several partners in the library sector and beyond.

Network neutrality means that internet service providers should treat all websites and services the same. Without net neutrality, providers can choose to block legal content and decide the speed and quality of data transmission. In February 2015, the FCC took action to help ensure net neutrality. The agency’s Open Internet Order requires broadband internet providers to provide a fast, fair, and open internet and to comply with an array of rules. What FCC Chairman Tom Wheeler calls the order’s “bright-line rules” are designed to prevent providers from controlling what people have access to on the internet. Under these rules:

Hundreds of library supporters from across the country met with their congressional representatives on May 5–6, 2014, to advocate for libraries during the American Library Association’s 40th annual National Library Legislative Day. Senator Angus King (I-Maine) jumpstarted the event by addressing library advocates at the opening briefing at the Liaison Capitol Hill Hotel in Washington, D.C. Additional speakers included Maine State Librarian Linda Lord; Gabriel Rottman, legislative counsel for the American Civil Liberties Union; Shawn Daugherty, assistant director of the Scholarly Publishing and Academic Resources; and Peter Jaszi, intellectual property expert and professor of law at the American University Washington College of Law. Library supporters who could not attend the meetings connected virtually with legislators via phone calls, emails, and social media platforms.

ALA launched the Policy Revolution! initiative in 2013 to reposition the library community in its national public policy advocacy. Decision makers and influencers do not have a good understanding of how contemporary libraries contribute to the array of national policy goals such as education, employment, entrepreneurship, community engagement, and individual empowerment—The E’s of Libraries. Thus the first goal of the initiative is to develop a national public policy agenda for the library community. A draft agenda was circulated in January 2015 for public comment.