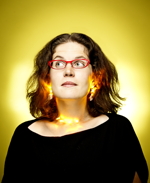 Playing to Learn: A Maker's Perspective

What role does play have in learning? What makes a maker a maker? The growth of the Maker Movement gives us an opportunity to rethink the role the places and ways in which learners of all age explore their interests.

AnnMarie Thomas is an engineering professor who spends her time trying to encourage the next generation of makers and engineers.

AnnMarie joined the faculty of the University of St. Thomas in the fall of 2006.  Previously, she was a faculty member at Art Center College of Design.  She is the director of the Playful Learning Lab and leads a team of students looking at both the playful side of engineering (squishy circuits for students, the science of circus, toy design) and ways to use engineering design to help others. AnnMarie and her students developed Squishy Circuits.
Dr. Thomas, co-founded, and co-directs, the University of St. Thomas Center for Engineering Education (CEE).  Through this center, AnnMarie develops and teaches engineering courses for P-12 educators, and conducts research on engineering at the pre-collegiate level.
AnnMarie teaches Engineering Graphics, Machine Design, Dynamics (with Circus Lab), Toy Design, Product Design for an Aging Population, and Brain Machine Interfaces (seminar).
AnnMarie served as the Founding Executive Director of the Maker Education Initiative where she worked to establish the national Maker Corps program, and lay the groundwork for this nonprofit which has as its mission creating " create more opportunities for young people to make, and, by making, build confidence, foster creativity, and spark interest in science, technology, engineering, math, the arts—and learning as a whole."
AnnMarie has also worked on underwater robotics (at MIT, Caltech, and the Monterey Bay Aquarium Research Institute), specializing in biologically inspired propulsion.  She has consulted on projects ranging from the design/creation of a "musical earthquake-playing robot" to the initial research for a book on earthquakes in Los Angeles.  At Caltech, she founded the Caltech Robotics Outreach Group (CROG) and the Caltech/JPL/LEGO Middle School Robotics Conference.

Our view of 'technology’ tends to focus on particular systems – the discovery layer, the ILS, the repository, FaceBook. However, as researchers and learners are increasingly 'enacting’ their practices in technology mediated environments it means we need to take a more inclusive view of technology. It is not something separate from behaviors; it is deeply entangled with them. This means that we need to design and implement services in a different way, mindful of the environment into which they must fit.

This presentation will give some examples of what this means in practice and of how libraries are responding. The discussion will focus on research and learning workflows, discovery, research information management, and linked data.

Lorcan Dempsey oversees the research division and participates in planning at OCLC. He is a librarian who has worked for library and educational organizations in Ireland, England and the US.

Lorcan has policy, research and service development experience, mostly in the area of networked information and digital libraries. He writes and speaks extensively, and can be followed on the web at Lorcan Dempsey's weblog and on twitter. Before moving to OCLC Lorcan worked for JISC in the UK, overseeing national information programs and services, and before that was Director of UKOLN a national UK research and policy unit at the University of Bath. Lorcan is Irish, and before moving to the UK he worked in public libraries in Dublin, Ireland. 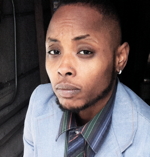 Kortney Ryan Ziegler is an Oakland based award winning artist, writer, and the first person to hold the Ph.D. of African American Studies from Northwestern University.
He is the director of the multiple award winning documentary, STILL BLACK: a portrait of black transmen, runs the GLAAD Media Award nominated blog,blac (k) ademic, and was recently named one of the Top 40 Under 40 LGBT activists by The Advocate Magazine and one of the most influential African Americans by TheRoot100.
Dr. Ziegler is also the founder of Trans*H4CK--the only tech event of its kind that spotlights trans* created technology, trans* entrepreneurs and trans* led startups.