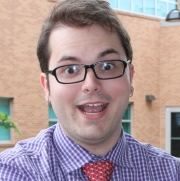 I strive to ensure literacy surrounding data and information-visualization concepts, and work to support open, accessible data and software in the sciences and beyond. If elected, I would focus on membership initiatives--I strongly believe LITA is poised to do great things, and that the membership is ready, so let's mobilize and make stuff happen! In my time involved with ALA, LITA has consistently been the division that can reposition itself rapidly to address the concerns members raise. I'm running for Director-at-Large to contribute my hands and skills to the division that got me started at ALA and in my career.