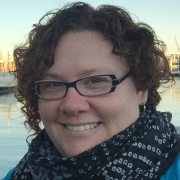 If elected as a member of the LITA board, I will focus my attention around three pillars: Advocacy, Global Perspectives, and Equity & Inclusion.

Advocacy means finding ourselves at the table with ALA’s Washington lobbyists and setting an agenda for regular communication with the membership about our goals, our successes, and our failures with explanation of what those results mean.

Global Perspectives means creating strategies with the larger international community in mind before decisions are made. LITA must encourage a global perspective around information access, preservation, and retrieval.

Equity & Inclusion means taking a more active role in encouraging and supporting women, the differently abled, and persons of color to pursue leadership positions within our ranks.

Evviva Weinraub is the Associate University Librarian for Digital Strategies at Northwestern University and the co-Project Director on the Avalon project.

At Northwestern, Evviva has broad responsibilities for development and implementation of technology services within the libraries primarily focused on digital collections and repositories, metadata and discovery services, and infrastructure and desktop computing. With Avalon, she works with her co-Director to establish overall project direction and priority setting. She has spoken about engagement with open source communities, building experiential learning opportunities, digital preservation, and technological innovation.