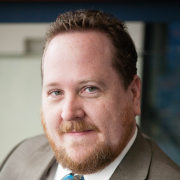 My primary professional concerns are the near-future risks and opportunities which come from the rise of machine learning, the continual march of job automation, and the potential that comes with decentralization technologies. LITA members are ideally situated to help lead the profession through the next decade of radical change emerging from these technologies. Should I be elected, I will work with LITA to empower members and help to educate the profession to prepare for these changes, as well as the related problematic areas of privacy and algorithmic bias. We cannot risk the cementing of power structures that disadvantage the marginalized and that reinforce existing social hegemonies. I want to help LITA members create a better future while ensuring that existing prejudice, privilege, and hate does not become embedded in the technologies of tomorrow.

Were/are you a Spectrum Scholar?

Were/are you an Emerging Leader?

I am proud of all of my work in libraries, from leading the first library ILS project to put data into OCLC’s WorldShare system to being a recipient of a Knight Foundation News Challenge for Libraries grant. At the University of Tennessee at Chattanooga, I led the technology planning for a brand new academic library, and was on the core design team from the very beginning of a 48 million dollar and nearly 7 year process. That was definitely a once-in-a-career experience, and led to an amazing new space and services for the students at UTC.
I’ve worked to educate and inform librarians everywhere through publications and presentations, including multiple books and Library Technology Reports, webinars for ALA Techsource and other providers, and dozens of workshops and presentations on the future of technology. My educational efforts taken as a whole are something of which I am very proud.
For a complete list of my accomplishments, please take a look at my CV.

Number of Years as an ALA Member

< Go to the 2018 Election Information page