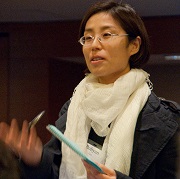 To further propel these positive changes, I believe it is time for LITA to revisit some of the long-standing wish-list items such as lower membership fees, a comprehensive online streaming and attendance option for conference programs, and ways for LITA members with a limited travel budget to fully participate and serve in LITA leadership positions. While difficult, the logistical challenges at the ALA level, which these changes may require, can be overcome. If elected, I will work towards LITA as a vocal advocate and an active leader in bringing about these changes.

Were/are you a Spectrum Scholar?

Were/are you an Emerging Leader?

For the past three years, I served on the LITA Board of Directors. This gave me an opportunity to learn how LITA operates as an association and allowed me to participate in creating positive changes and differences in LITA. I drafted LITA’s official post-election statement on diversity, provided the charge for the LITA Personas Task Force and recruited its members, and participated in creating the LITA Strategic Plan 2016-2018. The LITA Board exists to better serve diverse interests of LITA members, and I am honored that I was able to play a role in that.

I also chaired and served on many LITA committees and interest groups (IG). Most recently, I chaired the LITA User Experience IG and the LITA/OCLC Kilgour Award Committee. Currently, I am serving on the ALA Office for Information Technology Policy (OITP) Advisory Committee and the ALA Center for the Future of Libraries Advisory Group. Through this experience, I learned a great deal about how to work together with people from diverse backgrounds with shared interests for a common goal.

Number of Years as an ALA Member

< Go to the 2017 Election Information page