A list of awards and grants that may be of interest to those who celebrate Día in their library and community is compiled below.

Américas Award –The Consortium of Latin American Studies founded the Américas Award in 1993 to encourage and commend authors, illustrators and publishers who produce quality children’s and young adult books that portray Latin America, the Caribbean, or Latinos in the United States, and to provide teachers with recommendations for classroom use. CLASP offers up to two annual book awards, together with a commended list of titles. 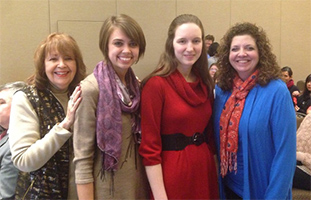 Estela and Raúl Mora Award – Established by Día founder, Pat Mora, and her siblings in honor of their parents, the Mora award and honors are presented annually to the most exemplary Día celebrations. The Mora Award is currently sponsored and administered by First Book. In honor of Día's 20th anniversary in April 2016, the Mora Award will be open for the first time to school-based and school-led partnerships that adopt Día as a way of connecting all children to bookjoy and promoting literacy all year round, culminating with Children's Day/Book Day celebrations in April.

The Mora award was previously administered by REFORMA (National Association to Promote Library and Information Services to Latinos and the Spanish-speaking). The winners of the Mora Award, to date, are listed on the REFORMA website. 2014 Mora Award winners pictured to the right with Pat Mora.

Pura Belpré Award – The Pura Belpré Award, established in 1996, is presented to a Latino/Latina writer and illustrator whose work best portrays, affirms, and celebrates the Latino cultural experience in an outstanding work of literature for children and youth. It is co-sponsored by the Association for Library Service to Children (ALSC), a division of the American Library Association (ALA), and the National Association to Promote Library and Information Services to Latinos and the Spanish-Speaking (REFORMA), an ALA affiliate.

Talk Story Grant –Talk Story: Sharing Stories, Sharing Culture is a literacy program that reaches out to Asian Pacific American (APA) and American Indian/Alaska Native (AIAN) children and their families. The program celebrates and explores Asian Pacific American (APA) and American Indian/Alaska Native (AIAN) stories through books, oral traditions, and art to provide an interactive, enriching experience. Children and their families can connect to rich cultural activities through Talk Story in their homes, libraries, and communities. This grant is aimed to give financial support to libraries and community organizations who want to introduce a Talk Story program into their library, focusing on APA or AIAN cultures.

Awards that Celebrate Diversity in Children's Literature - Based on a list originally published in Children and Libraries (Vol. 13, no. 3/Fall 2015), this webpage shares a sampling of book awards and recommended reading lists that highlight high-quality literature for young people about diverse peoples and triumphs of the human spirit.