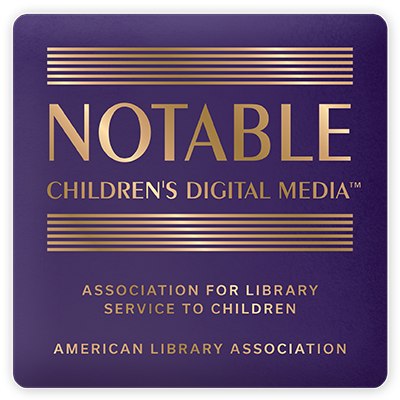 Children join Artie on an interactive and creative drawing adventure as they learn how shapes can combine in a variety of ways to form objects. Downloadable worksheets for continued learning off-screen are also included.

Designed by the Royal Children's Hospital in Melbourne, Australia, this app uses videos and games to give kids a behind-the-scenes "tour" of the hospital and lets kids explore the hospital's different departments and careers.

Hopscotch is a visual coding language that allows kids to create their own games and apps via drag and drop. Video tutorials and lesson plans for educators are also available.

Explore physics concepts in a fun, game-based environment. Complete levels to earn additional objects to use in building your own invention.

Whimsical characters guide early learners through a multitude of interactive songs, videos, and activities in the areas of literacy, language, math, and logic. Caregivers can also track their child's progress through a report card feature.

This app introduces letters, spelling, typing, and animals to kids. Children discover new words as they interact with Lexi's World.

Learn about the Thyssen-Bornemisza Museum's most famous works of art through interactive games. Young artists can also upload or create their own masterpieces in the art studio, using 20 different colors and four artistic mediums.

Relax into bedtime with calming stories, specifically created to help children drift off to sleep with soothing music, audio effects, and narration.

A calming bedtime app, Nighty Night allows children to interact with the short story by turning off lights and putting animals to bed, accompanied by music and narration.

Peek-a-Zoo is a  simple-to-use app game that teaches children to recognize emotions and interpret facial expressions by having them answer questions about animated animals.

With 12 interactive games that can be played in English or Spanish, Play and Learn Science by PBS Kids encourages children and caregivers to explore basic earth science, physical science, and life science topics together.

Lindsay and co-host Teddy educate children on a variety of LGBTQ+ topics in an entertaining way in this web series. Printable activity sheets are also included.

Develop visual-spatial reasoning by playing with different shapes and then making meaning out of them using fun stickers and backgrounds.

Designed by NASA, this educational game explores life on the International Space Station and allows users to conduct scientific experiment games revolving around growing plants in space. Features additional information regarding actual plant life experiments in space, as well as an educator's guide.