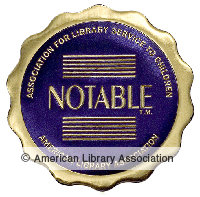 According to the ALSC Notable Children’s Books Committee manual, these categories loosely represent the following:  Younger Readers – Preschool-grade 2 (age 7), including easy-to-read books; Middle Readers – Grades 3-5, ages 8-10; Older Readers – Grades 6-8, ages 11-14; All Ages – Has appeal and interest for children in all of the above age ranges

Baba Yaga’s Assistant. By Marika McCoola. Illus. by Emily Carroll. Candlewick.
Using skills learned from her beloved grandma, Masha must pass a series of tests to become a witch’s assistant and get her annoying stepsister home safely. Graphic panels magically blend the contemporary with the traditional.
The Boys Who Challenged Hitler: Knud Pedersen and the Churchill Club. By Phillip Hoose. illus. Farrar.
This is a true World War II story of Danish teens who became resistance fighters while most adults in their country reacted passively to the Nazi takeover. Hoose weaves Pedersen’s words into an adventurous narrative about the young heroes. (Sibert Honor Book)
Child Soldier: When Boys and Girls Are Used in War. By Jessica Dee Humphreys and Michel Chikwanine. Illus. by Claudia Dávila. Kids Can.
Chikwanine chronicles the harrowing tale of his kidnapping at age five in the Democratic Republic of Congo, including the horrors of life as a child soldier. A graphic-novel biography.
Cuckoo Song. By Frances Hardinge. Abrams/Amulet.
After almost drowning, Triss deals with gaps in her memory, her brother’s ghost, a vengeful sister, and The Architect who seems to be orchestrating so much of her life. A cinematic and spine-tingling tale.
Drowned City: Hurricane Katrina and New Orleans. By Don Brown. Illus. by the author. HMH.
Heroes surface, and people find courage in this exceptional graphic novel that addresses incompetence, racism, and the resilience of the people of the Crescent City. (Sibert Honor Book)
Enchanted Air: Two Cultures, Two Wings: A Memoir. By Margarita Engle. Atheneum.
The daughter of an American father and Cuban mother, poet and novelist Engle describes her childhood living between two countries during a time of political tension for Cuba and the U.S. (Belpré Auhtor Medal Book)
First Flight around the World: The Adventures of the American Fliers Who Won the Race. By Tim Grove. illus. Abrams.
In 1924, a group of brave men faced violent weather, unreliable navigation, crashes, and unfamiliar foreign cultures in their goal to win the race to be the first to circumnavigate the globe by plane.
Goodbye Stranger. By Rebecca Stead. Random/Wendy Lamb.
With multiple perspectives, this tale explores the bonds and limits of friendship, as Bridge and her friends navigate the inevitable changes of growing up.
The Hired Girl. By Laura Amy Schlitz. Candlewick.
Using diary entries, 14-year-old Joan shares her journey toward a better life. New surroundings and experiences in Baltimore lead to moments of adventure and self-discovery.
The Lightning Queen. By Laura Resau. Scholastic.
An unlikely friendship between Esma, a Romani girl, and Teo, a Mixteco boy, underpins an adventurous story that spans several generations and presents insights into two marginalized cultures.
Listen, Slowly. By Thanhhà Lại. HarperCollins.
California-born Mai learns the true meaning of family and friendship when she travels with her grandmother to her native Vietnam and learns about her grandfather’s fate.
Most Dangerous: Daniel Ellsberg and the Secret History of the Vietnam War. By Steve Sheinkin. illus. Roaring Brook.
Daniel Ellsberg, a former Pentagon insider, risks everything in order to reveal the corruption and deception that led to U.S. involvement in the Vietnam War.
My Seneca Village. By Marilyn Nelson. Namelos.
Forty-one vivid poems, with voices inspired by actual individuals, present a historical glimpse at Seneca Village, the first thriving African-American community in the U.S., which, before it was razed, stood where Central Park is today.
Orbiting Jupiter. By Gary D. Schmidt. Clarion.
Jack’s new 13-year-old foster brother, Joseph, has a checkered past, including fathering a daughter named Jupiter. While Joseph’s love for Jupiter compels Jack’s family to do everything they can to help him, it may not be enough.
Rhythm Ride: A Road Trip through the Motown Sound. By Andrea Davis Pinkney. illus. Roaring Brook.
Take a ride with “the Groove” through Motown.  Discover how Berry Gordy Jr. created musical hits and grew his company from a small business in Detroit to a huge studio in California.
The Seventh Most Important Thing. By Shelley Pearsall. Knopf.
After throwing a brick at the Junk Man’s head, 13-year-old Arthur is sentenced to assist him. Little does he know that the junk he collects is part of a significant work of art.
The Smoking Mirror. By David Bowles. IFWG.
In an action-packed, fantasy novel, that combines Aztec and Mayan mythology with life in contemporary South Texas and Mexico, 12-year-old twins descend into the Land of the Dead to find their mother. (Belpré Author Honor Book)
The Thing about Jellyfish. By Ali Benjamin. Little, Brown.
Suzy Swanson suspects that a rare jellyfish sting caused the death of her friend. With imagination and determination, she sets out on a journey to prove her theory—and starts her journey of healing.
Turning 15 on the Road to Freedom: My Story of the 1965 Selma Voting Rights March. By Lynda Blackmon Lowery, as told to Elspeth Leacock and Susan Buckley. Illus. by P. J. Loughran. Penguin/Dial.
This highly personal account of the historic 1965 voting rights march from Selma to Montgomery gives voice to activists participating in Civil Rights history. (Sibert Honor Book)