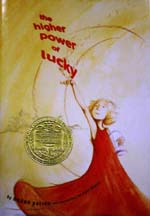 The 2007 Newbery Medal winner is The Higher Power of Lucky written by  Susan Patron, illustrated by Matt Phelan, published by Simon & Schuster/Richard Jackson.

“‘Lucky’ is a perfectly nuanced blend of adventure, survival (emotional and physical) and hilarious character study... as well as a blueprint for a self-examined life,” said Newbery Medal Committee Chair Jeri Kladder. “Through Lucky’s experiences, we are reminded that children support one another just as needy adults do.” 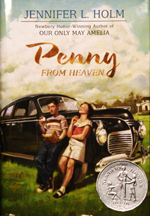 In Holm’s book, 11-year-old Penny looks forward to spending the summer rooting for the Brooklyn Dodgers and scheming with her cousin Frankie. Instead she navigates the space between her two families and uncovers the reason for their estrangement in this funny and touching tale of intergenerational love set in 1953.

In “Hattie Big Sky,” 16-year-old orphan Hattie Brooks is looking for a place to belong – a home. In 1918 she leaves Iowa for the Montana prairie. In this engaging first-person narrative, Hattie strives to forge a new life. Vivid imagery and careful attention to historical detail distinguish this memorable novel that portrays her struggle to “prove her claim.”

“A boy can take off his shirt to swim, but not his shorts.” Twelve-year-old Catherine creates rules for her younger, autistic brother David in an attempt to normalize his life and her own; but what is normal?  In the debut novel, “Rules,” Lord’s heroine learns to use words to forge connections with her brother, her workaholic father and a paraplegic friend. With humor and insight, Lord demonstrates the transforming power of language.