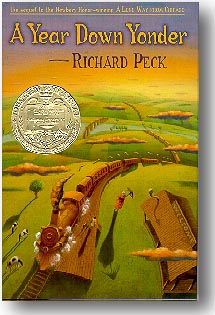 2001 Medal Winner The 2001 Newbery Medal winner is A Year Down Yonder by Richard Peck (Dial Books for Young Readers).

This linked series of carefully crafted vignettes is set in rural Illinois during the Depression, when fifteen-year-old Mary Alice leaves Chicago to spend a year with Grandma Dowdel. Her initial apprehension at life in a small town with a scheming old woman gradually gives way to admiration and love as she recognizes the warm heart behind Grandma's shenanigans.

"Peck's characters are fully realized, from the quiet widow nursing her war-injured son, to Maxine Patch, running out of Grandma's house draped only in the biggest snake outside the Brookfield Zoo," said Caroline S. Parr, chair of the Newbery Award Selection Committee. "These stories will, like Maxine, streak 'straight into the annals of undying fame'"

A Year Down Yonder is a sequel to Peck's 1999 Newbery Honor book A Long Way From Chicago, also published by Dial. 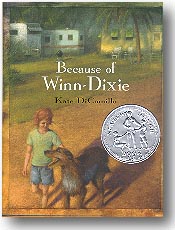 Because of Winn-Dixie
by Kate DiCamillo (Candlewick Press)

When a stray dog appears almost magically in the midst of the produce section of the Winn-Dixie grocery store, he leads ten-year-old India Opal Buloni from one new friend to the next in a small Florida town. The stories she gathers from each new friend help her to piece together a new definition of family.

"This humorous and touching first novel is as flavorful as the lozenges once made in town by Littmus W. Block, that taste sweet and sad at the same time," said Parr. 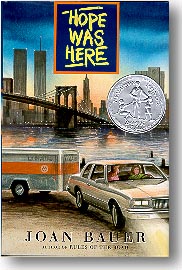 Hope Was Here tells the story of sixteen-year-old Hope and her aunt and their move to a small town in Wisconsin to join the "short order dance" of life at the Welcome Stairways Diner. In the course of just a few months, Hope encounters issues as diverse as her customers: corruption in politics, a new love, serious illness and the meaning of family.

"Bauer juggles story lines as well as Hope juggles plates, and the lessons of waitressing expand into lessons about the essentials of life, said Parr." 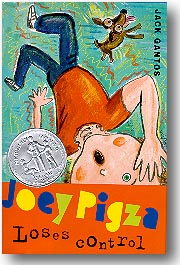 Spending the summer with his estranged father, Joey longs for the two of them to be winners together, but their lives spiral out of control. As the old "wired" Joey returns, readers will long to see him regain his balance in an out-of-kilter world. 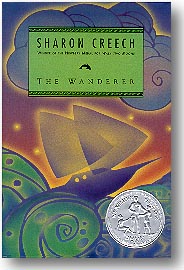 Sailing across the Atlantic with her uncles and cousins becomes a journey of discovery for thirteen-year-old Sophie in The Wanderer. In language as fluid and rhythmic as the sea itself, the carefully designed plot gradually reveals the truth of Sophie's past, as readers begin to wonder about this rag-tag crew.

"Through journal entries, Creech skillfully weaves multiple viewpoints into a story that speaks to the power of survival and the delicacy of grief."