Criss Cross follows the lives of four 14-year-olds in a small town, each at their own crossroads. This ensemble cast explores new thoughts and feelings in their quest to find the meaning of life and love.

“Writing in a wry, omniscient third-person narrative voice, Perkins deftly captures the tentativeness and incompleteness of adolescence,” said Award Committee Chair Barbara Barstow. “In 38 brief chapters, this poetic, postmodern novel experiments with a variety of styles: haiku, song lyrics, question-and-answer dialogue and split-screen scenarios. With seeming yet deliberate randomness, Perkins writes an orderly, innovative, and risk-taking book in which nothing happens and everything happens.”

In Whittington, Armstrong creates a glorious barnyard fantasy that seamlessly weaves together three tales: Whittington the cat’s arrival on Bernie’s farm, his retelling of the traditional legend of his 14th-century namesake, and one boy’s struggle to learn to read. These three tales unite the disparate citizens of the barn community in a celebration of oral and written language, the support of friends, the healing power of humor and the triumph of life. 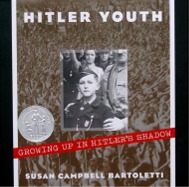 How could the Holocaust have happened? Bartoletti delivers a chilling answer by exploring Hitler’s rise to power through the first-hand experiences of young followers whose adolescent zeal he so successfully exploited and the more extraordinary few who risked certain death in resisting. The meticulously researched volume traces the Hitler Youth movement from the time it formally gathered strength in the early 1930s through the defeat of the Third Reich. The grace and clarity of the writing make Hitler Youth: Growing Up in Hitler’s Shadow a powerful addition to Holocaust literature for children.

Miri and the other young women of her rocky highland village are forced to leave their close-knit community when the prince must choose a bride in “The Princess Academy.” Like the miri flower, which sprouts from the cracks in the linder rock, Miri soon becomes the strong, resilient and courageous leader of the academy. The book is a fresh approach to the traditional princess story with unexpected plot twists and great emotional resonance.

“And the children leaned in./And listened real hard.” Jacqueline Woodson’s magnificent poem Show Way tells the story of slavery, emancipation and triumph for each generation of her maternal ancestors. She pays tribute to the creative women who guided their “tall and straight-boned” daughters to courage, self-sufficiency and freedom. Whether with quilts or stories, poems or songs, these women discovered and shared the strength to carry on. “There’s a road, girl./There’s a road.”