About the Children's Literature Legacy Award 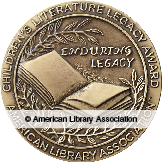 Administered by the Association for Library Service to Children, a division of the American Library Association, the Children’s Literature Legacy Award honors an author or illustrator whose books, published in the United States, have made, over a period of years, a substantial and lasting contribution to literature for children through books that demonstrate integrity and respect for all children’s lives and experiences. Each year the recipient is announced at the ALA Midwinter Meeting and is honored at the Annual Conference in June. The recipient receives an award citation and presents an acceptance speech. The award may be given posthumously.

The Association presented a special award to Laura Ingalls Wilder for her lasting and substantial contribution to literature for children in June 1954. Thereafter, the ALSC Board established an ongoing award to recognize the lifetime achievement of a children’s author and/or illustrator to next be awarded in 1960. The award was known as the Wilder Medal between 1960 and 2017. The name was changed to the Children’s Literature Legacy Award in 2018.