The 2008 Caldecott Medal winner is The Invention of Hugo Cabret  by Brian Selznick (Scholastic Press, an imprint of Scholastic)

From an opening shot of the full moon setting over an awakening Paris in 1931, this tale casts a new light on the picture book form. Hugo is a young orphan secretly living in the walls of a train station where he labors to complete a mysterious invention left by his father. In a work of more than 500 pages, the suspenseful text and wordless double-page spreads narrate the tale in turns. Neither words nor pictures alone tell this story, which is filled with cinematic intrigue. Black & white pencil illustrations evoke the flickering images of the silent films to which the book pays homage.

Henry's Freedom Box: A True Story from the Underground Railroad  by illustrated by Kadir Nelson, written by Ellen Levine (Scholastic Press, an imprint of Scholastic)

Inspired by an antique lithograph, Kadir Nelson has created dramatically luminous illustrations that portray Henry “Box” Brown's ingenious design to ship himself in a box from slavery to freedom. 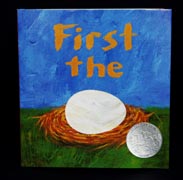 The Wall: Growing Up Behind the Iron Curtain, written and illustrated by Peter Sís (Farrar/Frances Foster)

The Wall: Growing Up Behind the Iron Curtain, a graphic memoir of Sís's youth in Prague, brilliantly weds artistic and design choices to content: tight little panels with officious lines and red punctuation; full-bleed line-and-watercolor spreads of nightmares and dreams; color and absence of color. 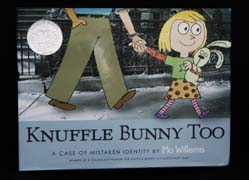 Willems sets the stage for one of the most dramatic double-paged spreads in picture-book history in Knuffle Bunny Too: A Case of Mistaken Identity. Masterful photo collages take Trixie and her daddy through their now-familiar Brooklyn neighborhood to the Pre-K class where Trixie discovers that her beloved Knuffle Bunny is not “so one-of-a-kind anymore.”