The May Hill Arbuthnot Lecture is an annual event featuring an author, critic, librarian, historian or teacher of children’s literature, of any country, who shall prepare a paper considered to be a significant contribution to the field of children’s literature.  This paper is delivered as a lecture each April, and is subsequently published in Children and Libraries, the journal of ALSC.

Once the name is made public, institutions wishing to host the lecture may apply.  A library school, department of education in a college or university, or a public library system may be considered. 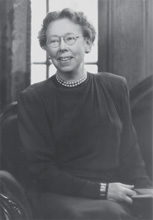 May Hill Arbuthnot (1884-1969) was born in Mason City, IA, and graduated from the University of Chicago in 1922, receiving her master's degree in 1924 from Columbia University. Along with educator William Scott Gray, she created and wrote the Curriculum Foundation Readers—better known as the "Dick and Jane" series—for children, published by Scott, Foresman and Company (now Pearson Scott Foresman).

Her greatest contribution to children's literature, however, was her authorship of Children and Books, the first edition of which was published in 1947. In 1927, she joined the faculty of Case Western Reserve University, and there she met and married Charles Arbuthnot, an economics professor. She also served as editor of both Childhood Education and Elementary English. Her other works include The Arbuthnot Anthology of Children's Literature and Children's Books Too Good to Miss.

To link Arbuthnot's name with an oratory award makes perfect sense. When accepting the award in 1969, she recalled "that long stretch of years when I was dashing from one end of the country to the other, bringing children and books together by way of the spoken word."  She also affirmed, "I am a strong believer in the efficacy of direct speech.... a forthright vigorous lecture can set fire to a piece of literature that had failed to come to life from the printed page." She was thrilled at the prospect of this award providing a forum for "new voices speaking with new insight and new emphasis in the field of children's lectures." (Quote from The Arbuthnot Lectures, 1970-79, ALA/ALSC, 1980.)

Once the lecturer is announced, at the ALA Midwinter Meeting,  institutions wishing to host the lecture may apply. A library school, department of education in college or university, or a children's library system may be considered. This paper is delivered as a lecture each April or May, and is subsequently published in Children & Libraries, the journal of the Association for Library Service to Children. ALSC established the lecture series in 1969 with sponsorship from Scott, Foresman and Company. The lectureship is now funded by the ALSC May Hill Arbuthnot Honor Lecture Endowment, and administered by ALSC.