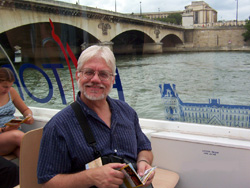 The People You Get to Know

I tend to have the radio on at work. Actually, it’s the audio streaming through the website that’s on, not actually a real radio. I know I’m probably in violation of numerous ALA policies having to do with bandwidth usage, etc. I listen to Northern Illinois University’s public broadcasting station, WNIU (www.northernpublicradio.org). It streams classical music from Classical24, a subsidiary of American Public Media, which also operates Minnesota Public Broadcasting, which also broadcasts Prairie Home Companion.

I’ve listened to WNIU for many years now, and I have developed a relationship with the daytime on-air hosts (of course unbeknownst to them). The relationship exists only in my mind, but nevertheless it’s somewhat comforting to know that when I get in in the morning, I’ll hear John Zech or later Lynne Warfel. After so many hours of listening, I feel I know them.

I can say the same about my years at ALCTS. During the past 13 years, I’ve had the honor of meeting and getting to know people whom I would never have had the opportunity to meet without being in my position, including my own staff, Julie and Christine, and the people who work at ALA. One of the real joys of being part of ALCTS or any association really is just this, meeting people who we couldn’t have met any other way (or at the very least, had a very slim chance of meeting). I look at all the ALA presidents I’ve worked with, or the many speakers, like this year’s President’s Program and ALCTS Forum speakers Duane Bray and Steve Berry. I am fortunate in many ways, and it all has been enriching and worthwhile.

And certainly there are you, the ALCTS members; a great mix of backgrounds, personalities, experience, expectations, and dreams -- a wonderfully interesting group of people to be part of.

Which is a long about way of getting to my point; being a member of an association as cool (I know I’m dating myself), okay, as awesome as ALCTS, totally, is richly rewarding in just the opportunity you have to know really cool, awesome people.

I believe it’s more than networking or mentoring, as is the most often cited benefit of being an association member, because those have different connotations than just getting to know people. There is something unifying and satisfying in having a fairly new librarian sit down next to an ARL director and talk about institutional repositories or great movies or salmon fishing. Then I know that the association is really doing its job: bringing previously unconnected, diverse people together.

Maybe there is job opportunity that comes of it or a speaking engagement or advice on a project. These are just byproducts of the “knowing.” They are not necessarily the intent of the “knowing.” Whether it committee work or interest groups or the ALCTS Board, there are many opportunities to know people you didn’t previously know. I hear this a great deal when I talk with the new President-elect and section Chair-elects. They often know each other only by name, if by that. Getting these six people together for even an hour or so gives each of them a chance to see the person, get to know them a little, and find out more about what they have done and are going to do when they take office. I know, it’s shocking that I don’t know everyone in ALCTS and they don’t know me, but the truth is I don’t and they don’t. I am always meeting and getting to know new people. Over the years this has enriched my time at ALCTS and influenced my thinking and my goals for myself and ALCTS. New people mean having new ideas to try out and new conversations to have.

For more than 13 years I have been privileged to work and get to know the outstanding members who have become President of ALCTS. And for that matter, many of those who were candidates and did not become President. From Peggy Johnson, who was president when I came to ALA, to Carolynne Myall this year and then to Genevieve Owens, next year, the ALCTS presidents have dedicated themselves to moving ALCTS forward. Their influence and “knowing” value did not end when their term ended. Many of them have rededicated themselves to furthering ALCTS by becoming LRTS editor, Division Councilor, committee chairs and members, President’s Program chairs, members of awards juries, task force chairs and members, and much more. This gives ALCTS members access to a wealth of experience.

So I urge every member to take advantage of the “knowing” benefit being a member of ALCTS offers you. You may make a life-long friend you didn’t know you could have otherwise.