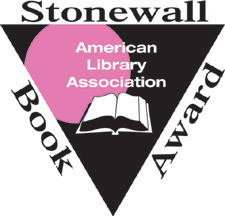 The first and most enduring award for lesbigay books is the Stonewall Book Awards, sponsored by the American Library Association's Gay, Lesbian, Bisexual, and Transgendered Round Table. Since Isabel Miller's Patience and Sarah received the first award in 1971, a total of forty-eight books have been honored for exceptional merit relating to the gay/lesbian/bisexual/transgendered experience.

Stonewall Book Award-Barbara Gittings Literature Award and the Stonewall Book Award-Israel Fishman Non-Fiction Award are presented to English language works published the year prior to the announcement date. The award, which consists of a commemorative plaque and a cash stipend, is announced in January and presented to the winning authors or editors at the American Library Association Annual Conference in June.

Nominations for the Book Award may be made by any individual not affiliated with the publisher of the book being nominated. A short statement describing why a book is being nominated must accompany the nomination, which must be submitted to the Gay, Lesbian, Bisexual, and Transgendered Book Award Committee Chair by October 31 of each year. Mail must be postmarked by the nomination deadline. Nominations will be accepted by regular and electronic mail as well as through facsimile transmission (fax).

History of the Stonewall Book Awards

The history of the Book Award mirrors the growth of the lesbigay publishing industry. Although in the first years of the award the committee had only a handful of books from which to choose, by 1995 they had to select the winners from a list of over 800 eligible titles.

The committee that surveys these multitudes of lesbian, gay, and bisexual publications is made up of equal numbers of women and men from various types of libraries across the United States. Ultimately, the committee must review the nominees and select five finalists each in the categories of nonfiction and literature. The winners are chosen from among these five finalists.

Please consider financial support to allow us to continue the tradition of honoring the finest in GLBT literature. For more information, visit the making donations page. Thank you.

The Stonewall honor books in non-fiction are:
"My one-night stand with cancer" by Tania Katan (Alyson Books)
"Queer London: perils and pleasures in the sexual metropolis, 1918-1957" by Matt Houlbrook (University of Chicago Press)
"The secret life of Oscar Wilde" by Neil McKenna (Basic Books)
"The tragedy of today's gays" by Larry Kramer (Jeremy P. Tarcher/Penguin)

The Stonewall honor books in literature are:
"I Am My Own Wife: a Play" by Doug Wright (Faber & Faber)
"The Line of Beauty" by Alan Hollinghurst (Bloomsbury)
"Luna: a Novel" by Julie Anne Peters (Megan Tingley Books, an imprint of Little, Brown and Company)
"A Seahorse Year" by Stacey D'Erasmo (Houghton Mifflin)

The Stonewall honor books in non-fiction are:
"Beyond Shame: Reclaiming the Abandoned History of Radical Gay Sexuality" by Patrick Moore (Beacon Press)
"Both: a Portrait in Two Parts" by Douglas Crase (Pantheon)
"Dress Your Family in Corduroy and Denim" by David Sedaris (Little, Brown and Company)
"Warrior Poet: a Biography of Audre Lorde" by Alexis De Veaux (W. W. Norton)

For a list of other publications available from the American Library Association's Gay, Lesbian, Bisexual, and Transgendered Round Table, go to our publications/order form page.

Return to the ALA GLBTRT Home Page