Read the key findings from a survey conducted by Hart Research Associates and North Star Opinion Research on behalf of the American Library Association among 1,000 voters and 472 parents of children in public school. The survey was conducted March 1 to 6, 2022, and the sample is demographically and geographically representative of U.S. voters and parents.

Large majorities of voters (71%) oppose efforts to have books removed from their local public libraries, including a majority of Democrats (75%), independents (58%), and Republicans (70%). Most voters and parents hold librarians in high regard, have confidence in their local libraries to make good decisions about what books to include in their collections, and agree that libraries in their communities do a good job offering books that represent a variety of viewpoints.

1)  More than seven in 10 voters (71%) oppose efforts to remove books from public libraries, with majorities of voters across party lines opposed.

Would you support or oppose efforts to remove books from local public libraries because some people find them offensive or inappropriate and do not think young people should be exposed to them?

3) There is near-universal high regard for librarians and recognition of the important role that local public libraries and school libraries play in communities.

4) Most voters are confident in local public libraries to make good decisions about their collections and think libraries do a good job representing a variety of viewpoints. 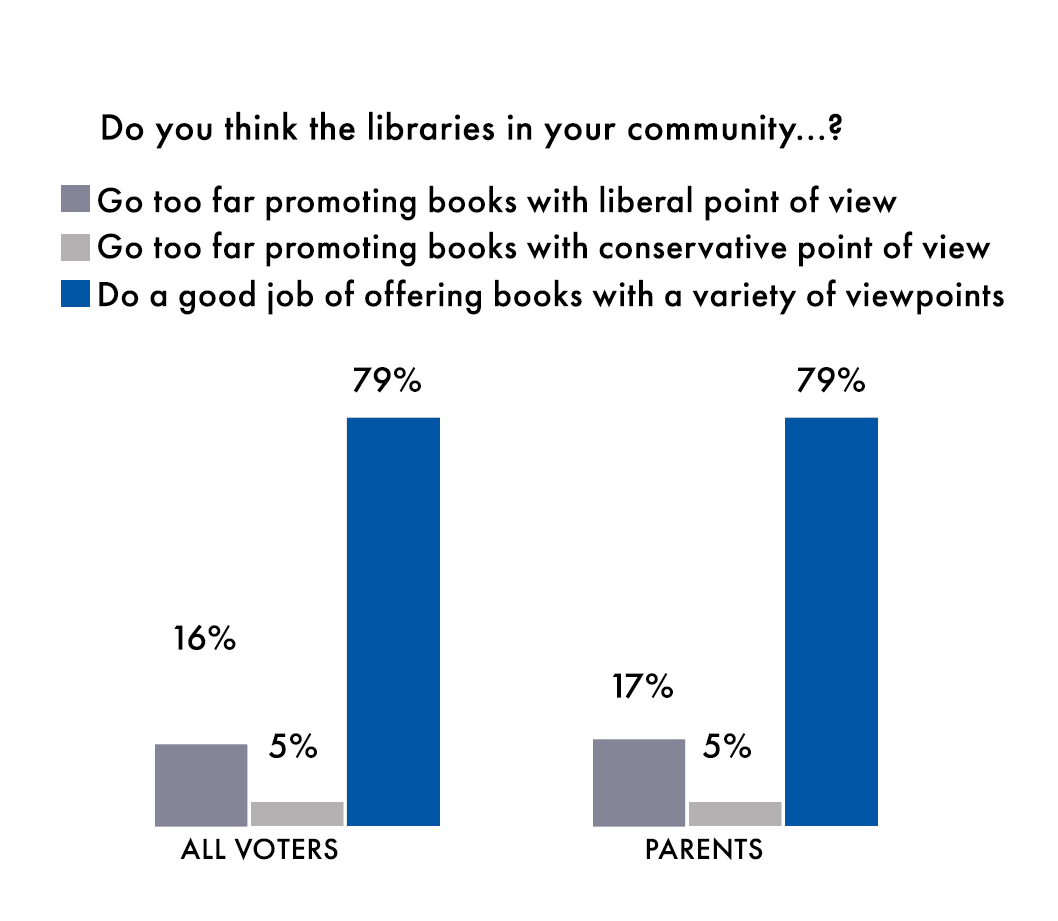 6) Voters and parents affirm the importance of giving young people access to books and not allowing individual parents to decide what books are available to other people’s children.

Agreement with Viewpoints Against Removing Books from Libraries

Please indicate which one of the following statements you agree with more.

STATEMENT A: We need to protect the ability of young people to have access to books from which they can learn about and understand different perspectives, and help them grow into adults who can think for themselves.

STATEMENT B: We need to protect young people from books they might find upsetting or that reflect ideologies and lifestyles that are out of the mainstream.

STATEMENT A: Individual parents can set rules for their own children, but they do not have the right to decide for other parents what books are available to their children.

STATEMENT B: Parents have a right not to have their children exposed to objectionable books at the library, and should be able to join with other parents in having those books removed.