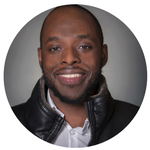 Inspired by a tweet by @miss_print, 2017-2018 Scholar Sony Prosper (pictured here) posed this request to fellow members of this year’s Spectrum cohort: “Post your top 5 books of all time. Don’t think about it, just jot down the first few books that come to mind.” We’ve rounded up their responses, which span a variety of genres and publication dates. Below are some of the 2017-2018 Scholars’ favorite reads!

Sony is currently pursuing his MLIS at Simmons College in Boston, MA, and holds a B.A. in History from Mercer University. He works as an Archives and Research Assistant at Tufts University Digital Collection & Archives in Medford, MA, where he assists with public services operations, processing archival materials, and designing and installing exhibits. His professional interests are in Haitian collective memory and Haitian archives, the submergence of Black memory in the United States in relation to mainstream American memory, oral history, public outreach, and bringing more students from underrepresented communities into the information professions.