Keeping Up With... Beacons

This edition of Keeping Up With… was written by Carli Spina.

Bluetooth low energy proximity sensing beacons, more commonly known simply as beacons, are a type of hardware that can notify nearby Bluetooth devices of their presence and transmit information. One of the most commonly available versions of this technology is the iBeacon technology from Apple, though the field is likely to expand as the use of this technology increases. The use of these beacons can have a host of applications from wayfinding to payments, which means that there are a number of fields eagerly looking to see how the technology will develop.
The beacon devices themselves vary across manufacturers, but they are generally fairly small and are meant to be able to be placed around a space to create a network within which mobile device users can receive information as they come into proximity with various beacons in the network. When paired with a special application, this information can trigger events on a mobile device such as a pop-up notification of information relevant to that specific location.

How Do Beacons Work? 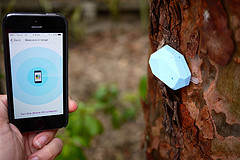 A beacon’s sole function is to transmit a small package of data continuously. When devices come into proximity to this transmission, it triggers specific actions on the device based on the corresponding application that the user has installed. Because this is a beacon’s sole function, they do not need an internet connection to work and are designed to be low energy, which means that the battery life is fairly impressive, with some models offering over 36 months of continual charge [1] and other models offering the option to plug the device into a power source. Often beacons are used for indoor spaces, but they can equally as well be used outdoors, though their effective range is limited. Most work best on devices that are in the range of a few centimeters to fifty meters from the beacon, though there are longer range beacons available on the market. [2]
Working with these devices is similarly flexible and straightforward. Because beacons simply transmit this small packet of information, any results that developers want to trigger on a device that is in proximity to the beacon must be part of a separate application that is written to work with the beacon. These applications can be quite versatile and as simple as an HTML and Javascript application. Beacon users can opt to create their own applications or take advantage of one of the many companies that are popping up to help institutions integrate beacons into their operations.

What Concerns Surround the Use of Beacons?

Though beacons have interesting potential, they also have drawbacks. In particular, many have concerns about the privacy implications of these devices. Though the beacons themselves only transmit information and do not collect any information from devices that come into proximity with them, they can trigger applications that do collect information. In particular, “the presence of iBeacons in a physical space can readily enable tracking because an application can record a beacon track and report it to a network service for further analysis.” [3] This has two potential implications for libraries that are interested in beacons. First, it is important to make clear what information is being collected when asking patrons to make use of beacons as well as a corresponding application and how patrons may opt out of this service. Second, and perhaps less directly, it is worthwhile for librarians to be cognizant of the implications of beacons as they grow more prevalent so that they can explain the potential privacy issues to patrons who may encounter beacons elsewhere even if the library is not itself making use of beacons.
There are also concerns about the security of these devices relating to the ease with which unauthorized people can detect and then spoof beacons in their own applications, as was the case at the Consumer Electronics Show in 2014 when a treasure hunt designed using beacons was “hacked by the team at Make Magazine so that they could win the treasure hunt without even being at the event.” [4] Though this is a real issue with the technology that can have some serious implications, most uses of beacon technology do not involve the transmission of private information, so it is often not a concern.

Who Is Using Beacons?

Though they are still not prevalent, beacons are being used by a number of industries. Some of the most enthusiastic adopters come from the retail sector with many major brands and stores experimenting with beacon networks as a way to reach users in their brick-and-mortar stores with specific deals related to the products within arm’s reach. This level of proximity targeting is one of the features that differentiates beacons from other past technologies used for similar purposes. This is also the feature that makes beacons useful for indoor navigation applications that transmit directional information to users as they move through a space. [5]
Though some retail companies were early adopters, the technology is spreading into other sectors. Virgin Atlantic launched its use of iBeacons at London’s Heathrow airport last year to improve passenger experience by offering location based prompts as passengers move through the airport. [6] Museums have also experimented with improving visitor experience using beacons. Brooklyn Museum experimented with iBeacons to allow visitors to ask questions in galleries and get answers from members of the audience engagement team. [7] Beacons can also be implemented to help institutions understand how people interact with their facilities. For example, the Guggenheim Museum has experimented with using beacons to see how visitors move through the museum. [8] While these uses of beacons are in their infancy, they nicely demonstrate the diverse ways that this technology can be used by institutions to improve their interactions with their visitors and customers.

How Can Libraries Use Beacons?

Recently libraries have been starting to adopt beacon technology as well. The Boston Athenaeum, an independent membership library in Boston, Massachusetts, used beacons to connect patrons to additional information about items in a recent exhibition. [9] Orlando’s Orange County Library System, on the other hand, allows patrons to opt into targeted event notifications based on the areas of the library that they frequent. Using BluuBeam, a beacon-based app development company that works with libraries, the library is able “to inform patrons about services that matched their
interests.” [10] Capira Technologies is working on another library-focused app that integrates with a library’s ILS and delivers personalized notifications to patrons as they move through the library, for example prompting them to pick up or renew materials. [11]
In the future, these uses of beacons could easily expand to help libraries to seamlessly connect with their communities. By partnering with local historical sites, a library might share information about related events or digital collections that might be of interest to the same audience. At the same time, as transportation venues begin to make use of the technology as Virgin Atlantic is in London, libraries could work with companies to prompt bored travellers to check out ebooks through the library. Within the library, beacons could be used to connect patrons with relevant electronic resources as they browse in specific sections of the library’s stacks or they could share instructions for technology in the library as patrons approach devices. The potential for beacons is limited only by the applications that are developed to work with them, so it will be fascinating to see how libraries use them in the future.