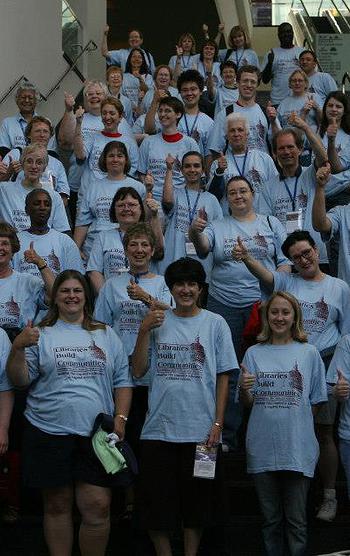 The origins of “Librarians Build Communities” likely came from the 1998 Volunteer Day held at the American Library Association (ALA) Midwinter meeting in New Orleans, co-sponsored by ALA and the Louisiana Library Association (LLA). Volunteer Day was a part of ALA president Barbara Ford’s theme,  “Libraries: Global Reach, Local Touch.” It is speculated that this first event informed the first Librarians Build Communities program in 2006.

In 2006, after Hurricane Katrina, ALA worked with a list of several organizations to coordinate volunteer efforts all over New Orleans for two specific days/times. Attendees paid a $10 registration fee for the special event, called “Librarians Build Communities!” Then ALA staffer, Teresa Koltzenburg wrote about the project for the ALA TechSource Blog.

The Annual Conference reports in the August 2006 American Libraries issue provided information on the various volunteer sites and activities, the participating community service groups, and company sponsors. Subsequent ALA Annual conferences have held “Libraries Build Communities” programs, with over 100 ALA members volunteering to assist in the conferences’ host cities. In 2007 LBC assisted school and public libraries in Washington, DC; in 2008, Anaheim, CA; in 2009, Chicago, IL; and in 2010, Washington, DC. Some volunteers assist other organizations (e.g. Habitat for Humanity, local food banks), but the majority of LBC volunteers to date have assisted libraries and librarians. Librarians Build Comunities is currently managed by the ALA Chapter Relations Office (CRO).

In 2012 Group G of the ALA Emerging Leaders continued this project, beginning pilots in several states.