Join the discussion and shape the future of LBC at ALA in San Francisco!

Register your interest on the Conference Scheduler

What does the phrase "librarians build communities" mean to you? Our project began with the idea that librarians can demonstrate commitment through volunteer work, but we recognize our engagement and commitments as library staff stretch far beyond that. To realize our full potential as a membership initiative group and eventually as a round table, we'd like to support, encourage, and recognize all forms of community connection. Bring your ideas and enthusiasm to this meeting to help craft the next movement in ALA and our profession - one that will celebrate the contributions and value that librarians bring to our communities.

In recognition of National Blood Donor Month, Librarians Build Communities organized a community blood drive during the 2015 ALA Midwinter Meeting in Chicago with partner LifeSource. The event was a success, collecting 32 donations that will save an estimated 93 lives. Thanks to all who donated!

Librarians Build Communities celebrated Membership Initiative Group status on June 30, 2014 at the ALA Annual Conference in Las Vegas. A group of founding members and supporters gathered at the Laguna Champagne Bar on The Palazzo casino floor. It was a great way to close out the conference and kick off a new phase of LBC!

Kristi Brumley, a 2012 ALA Emerging Leader who also worked with Librarians Build Communities, returned home to Boise, ID inspired to find a way to put LBC into action in her own community. A former Peace Corps volunteer, she's always had a heart for service. Leveraging her connection with the Returned Peace Corps Volunteers of Idaho led to a meeting with Rotary Club representatives who helped with donations and spreading the word. Thirty-five librarian volunteers at the Pacific Northwest Regional Library Conference donated 3 hours to sort, process and shelve donated books, create signage, and decorate the Boys and Girls Club library.

While the seed was planted the summer of 2012, the work continued through January 2014. Kristi used additional funds to purchase new books and also got a donation from Barnes and Noble! While she still visits the Boys and Girls Club to volunteer and calls on her community partners to help, the library is so well organized that it’s largely self-managing. “The neat thing was how many people got involved; it became a community effort.”

Ann Crewdson, Children’s Section Supervisor Librarian for King County Library System, has a heart for service and a heart for young people. Working in Seattle-area public libraries, she encountered the homeless daily. When ALA’s Mid-Winter Meeting was scheduled to take place in her city, she immediately sought an opportunity to help.

Utilizing ALA conference services, social and news media, she assembled a group of approximately 75 librarian volunteers who engaged in activities including attending presentations on best practices in services to the homeless, visiting local homeless assistance facilities, packing hygiene kits, and serving meals. The positive feedback from the participants proved that the Seattle LBC event fully lived up to that year’s Mid-Winter Meeting’s theme of “Community Engagement and the Promise of Libraries Transforming Communities.”

The Alaska Library Association hosted an LBC event in March 2012 during their state conference. A group of librarians gathered at a local senior center with laptops to teach technology skills, with some backup craft supplies and plans for the non-technically inclined. Sadly, the seniors in question didn't show up for the event, a reminder that even well-planned events don't always go quite as planned. Still, the librarians gathered were excited to help out and had several different options ready to meet the needs of the group they planned to help.

“My experience with Libraries Build Communities was one of the most fulfilling (and sweaty!) I’ve had while wearing my ‘librarian hat’. I lived in the suburbs of New Orleans as a child, so returning in 2011 to see my former home still in pieces 6 years later was very heartbreaking. But I got to help rebuild it! I spent an entire day working with St. Bernard Project at a home owned by a man named Kevin. The conditions were hard, few actual tools, no gloves, no bathrooms or running water. But I – we – fought through that, knowing that 6 years earlier the conditions were even worse; knowing that soon the conditions would be infinitely better.” 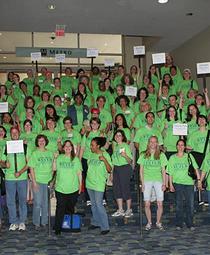 “I volunteered my time in June 2011 in New Orleans. I was assigned to a school that hadn’t received any damage from Hurricane Katrina, but needed work done because it had sat vacant for many years and it was going to be used as a school. I spent my time scraping old paint off the walls and applying new paint. These rooms were going to be used as classrooms. What I will remember most about the experience is the gratefulness of the school community. Summer school was in session and as students walked from class to class passing by us, the huge smiles and 'thank you's they had were amazing. I have never heard a teenager express so much joy in regards to school, ever! When ALA is in New Orleans again, I will gladly take a road trip down there and help again.” - April Pavis, MLS Teen Services Librarian, Loudoun County Public Library

Katrina ripped through the city and destroyed so many lives. The Libraries Build Communities program was a way that I could help rebuild the city in a small, personal way and be part of something good. I had the opportunity to work with the Archivist and her staff at The Newcomb College Research Center on Women, Tulane

University. I joined seven other librarians who decided to choose this project. We represented the East, Midwest, West and places in between. I learned a great deal about emergency preparedness that day from the people who experienced a life changing emergency first hand." - Rene Myers, Children's Servi 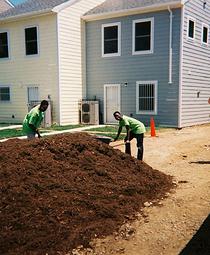 "I have been fortunate to join other librarians from all over the United States in this project over the years. I have had the privilege to work with librarians in places such as New Orleans, Washington, D.C., and Chicago. I have had the honor to help school libraries, public libraries and academic libraries. Each experience has helped me grow as a professional. I was able to learn something about the library that I was assisting them as well as the city I was visiting. In turn, I hope that my service helped the library that I chose to meet their goals and helped them learn about other libraries. This form of outreach helps both participant and host library. I am honored to be of service to the libraries that I have helped and I hope to continue the Libraries Build Communities volunteer opportunity for many years to come at ALA Annual.” - Karen H. Canary, MLIS, Ely Library, Westfield State University, Westfield, MA