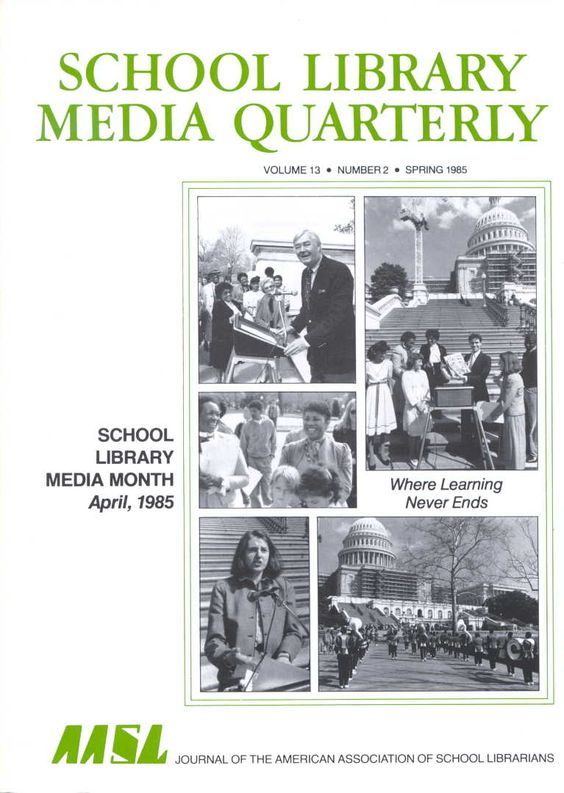 The following is excerpted and adapted from "AASL Celebrates First National School Library Media Month," which appeared in the Spring 1985 issue of School Library Media Quarterly (p. 83-84). Click on the cover image (right), which shows photos from the first national observance, to view full size.

The AASL efforts for a national School Library Month were spearheaded by Lucille Thomas, chair of the School Library Media Month Committee. Thomas was appointed by President Judy King in 1983.

Thomas and her committee gathered ideas from previous state and local celebrations for school libraries, and compiled a fifty-two-page handbook for the first national observance. In April 1985, members of the committee were Edna Bayliss, Elsie Brainard, Winona Jones, Elizabeth Kenneson, Elinor McCloskey, and Virginia Moore.

AASL officials, local and national dignitaries got the month off to a rousing start on April 1, 1985 with a ceremony on the west steps of the U.S. Capitol. Senator Daniel Patrick Moynihan (D-N.Y.) delivered the keynote address. Moynihan told the school librarians in the audience, "I want to thank you for what you do. I hope you know how important your work is. You change lives for the better. You touch people while they can still be touched."

In 2010, the name of the celebration was changed to School Library Month after the Board of Directors voted to readopt the professional title school librarian, from the former school library media specialist.