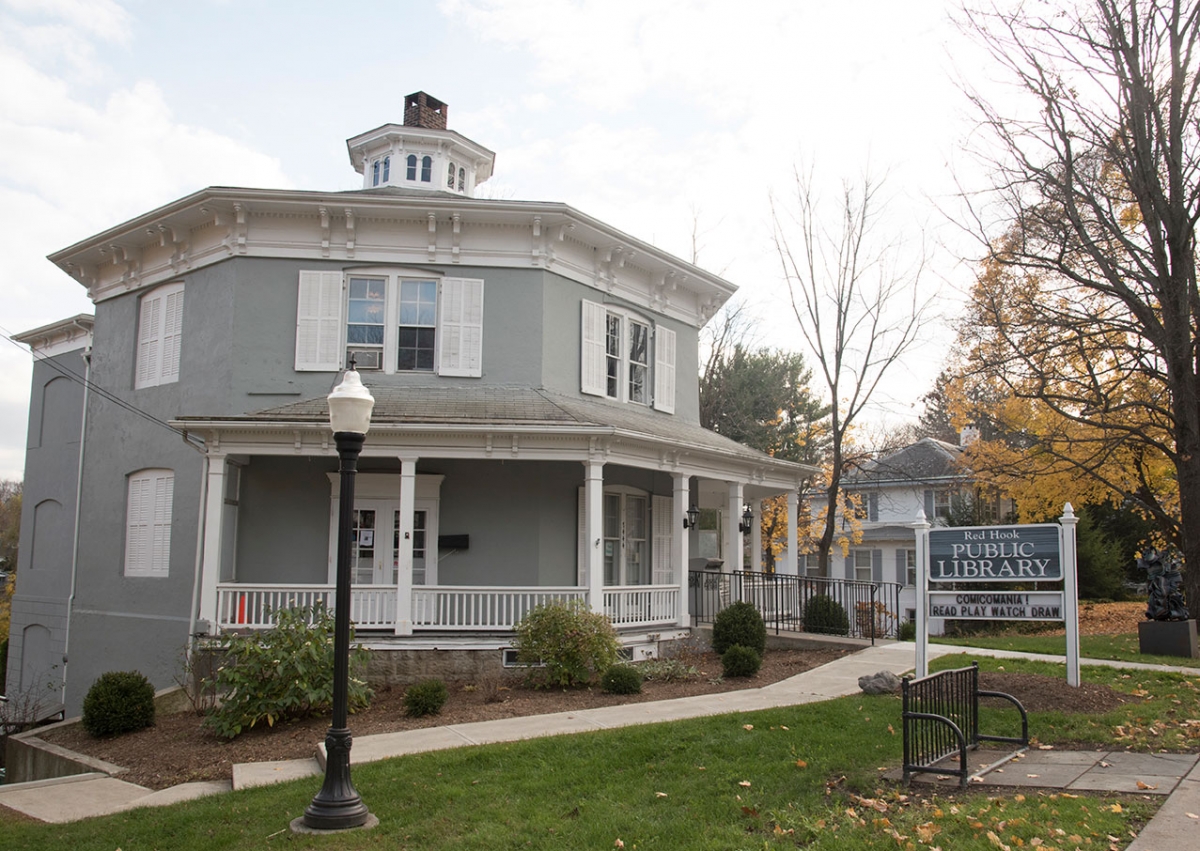 The Libraries Transforming Communities (LTC) team from Red Hook Public Library used their training to engage residents in their small town. They learned people were frustrated that problems in their community—even obvious ones—often went unaddressed. The only stoplight in town, which didn’t work properly, was emblematic of their concerns and came up in many discussions with residents. The LTC team took action and brought officials together to figure out how to x the problem. This seemingly small act sent a signal to the community that it was possible to make things happen, which has led to people stepping forward to work together on other issues that are keeping Red Hook from being more livable and connected. The library is playing a central role in convening these groups and has become a model for how other organizations want to work in the community.

The Village of Red Hook, New York—population 1,961—sits about 100 miles north of New York City near the Catskills and Hudson River Valley. It is home to Bard College, a nationally ranked liberal arts college that is the town’s largest employer.

When the discussion around community aspirations began in 2014, most residents reported how much they loved living in this community. A couple of issues quickly rose to the top that needed to be addressed, including one iconic one: the town’s only stoplight.

Every day, 14,000 vehicles passed through the light, which sat at the intersection of two state highways. The light’s timing was off, leading to wait times as long as seven minutes. Seeking to avoid the long delay, drivers frequently chose to cut through residential neighborhoods, endangering kids and adults who were walking and riding bikes in the streets. 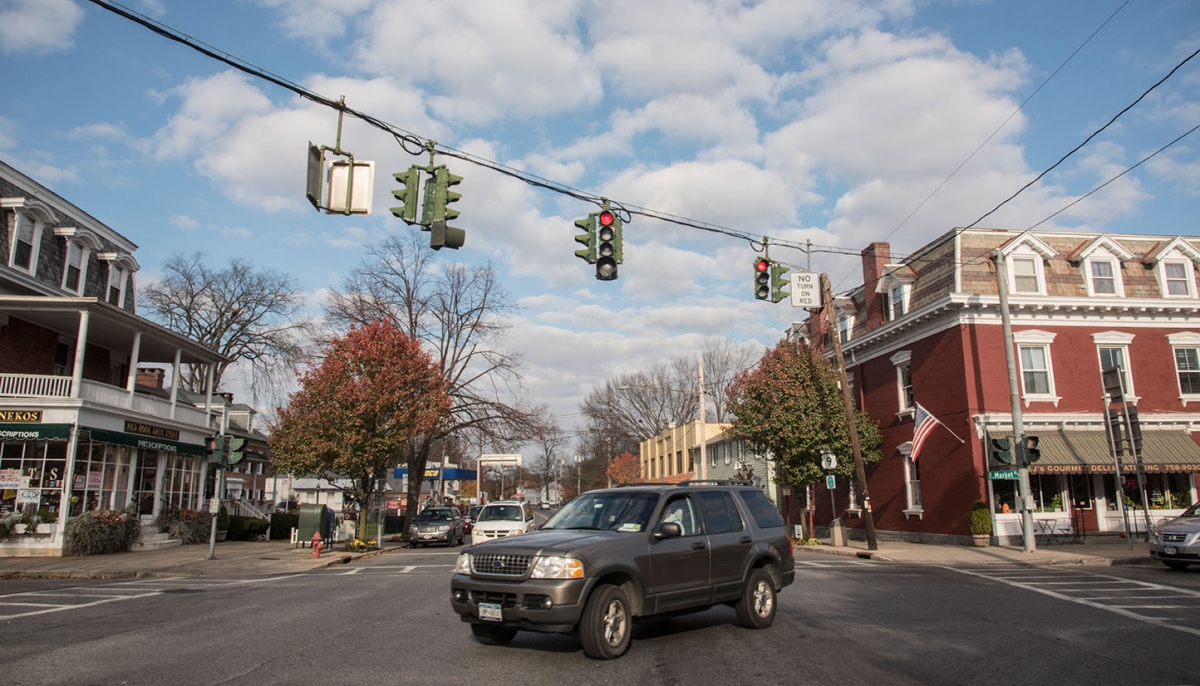 The light had been a problem as long as people could remember. Everyone knew it, yet the earliest it was expected to be addressed was 2017—three years after
this story begins. For a small town, this little traffic light was a big issue. Everyone in town knew it was a problem, but the sense of urgency was never fully communicated to the state. So it sat near the bottom of a long line of state-funded public infrastructure problems.

But a seemingly small act— people coming together in 2015 to talk, share ideas and x a problem—forged a new “can-do” narrative in Red Hook in which residents take ownership of their community in a different way. This substantial change was made possible by the efforts of a small group of leaders, organized by Red Hook Public Library, a small community library with only 4,500 cardholders.

Today, years ahead of schedule, the stoplight is fixed, but that’s just the beginning of this story. The work the library initiated to x the light became a catalyst for a variety of changes in improving the quality of life in Red Hook, making this small community better mobilized, better connected and more prepared to tackle complex challenges. Red Hook Public Library is now working in partnership with community groups, community leaders, Bard College and residents to take on a variety of issues.

Being a part of changes like these also marked a big shift for the library.

“[Before, the library] was completely off people’s radars,” said Erica Freudenberger, who became library director in 2010. “It was this musty old building that was best to be avoided.”

Freudenberger wanted to change the perception of the library and add more value to the community.

Shortly after being named library director, she started attending local Rotary and chamber of commerce meetings and joined a group of local leaders called Red Hook Together. Started by Erin Cannan, associate director of the Bard College Center for Civic Engagement, Red Hook Together met about every five weeks “as a way to address some of the ‘town and gown’ issues,” Cannan said.

At the first meeting Freudenberger attended, several people said they wished the community had a gathering place to help residents stay more informed about local issues.

“I said, ‘The good news is we have such a place.’ No one knew or believed me,” Freudenberger said. “That wasn’t their experience of the library. It was really about recognizing that we had to change the perception of who we were or what we were in the community. We started partnering with organizations and doing a lot of collaboration.”

For this reason, the library jumped at the chance to be part of the Libraries Transforming Communities (LTC) initiative, a partnership between the American Library Association and The Harwood Institute for Public Innovation, funded by the Bill & Melinda Gates Foundation. LTC aims to strengthen the role of libraries in helping communities solve problems and work together more effectively. As part of the initiative, Harwood trained and coached 10 library teams, made up of library staff and community partners. Over two years, teams learned to apply Harwood’s Turning Outward approach, a practice or discipline of understanding a community in a deep way and then using that knowledge as a reference point for choices and actions.

Freudenberger said she and the rest of the Red Hook team, which included Cannan, “felt very smug” going into the LTC project, thinking they were used to working collaboratively, listening to the community and getting results.

“We thought we were outwardly focused, but we weren’t,” Cannan said. “We were willing to be partners with people because we wanted to get something out of the partnership. It was transactional.”

After an initial three-day training with The Harwood Institute and ALA in May 2014, Red Hook’s LTC team knew it needed to connect deeper with the community in a way that wasn’t quid pro quo. The group decided to go door-to-door in the small town asking people four basic questions using Harwood’s Ask exercise:

1.    What kind of community do you want to live in?
2.    Why is that important to you?
3.    How is that different from how you see things now?
4.    What are some of the things that need to happen to create that kind of change?

Brent Kovalchik, Village of Red Hook deputy mayor and a member of the LTC team, partnered with a Bard student to do most of the canvassing. 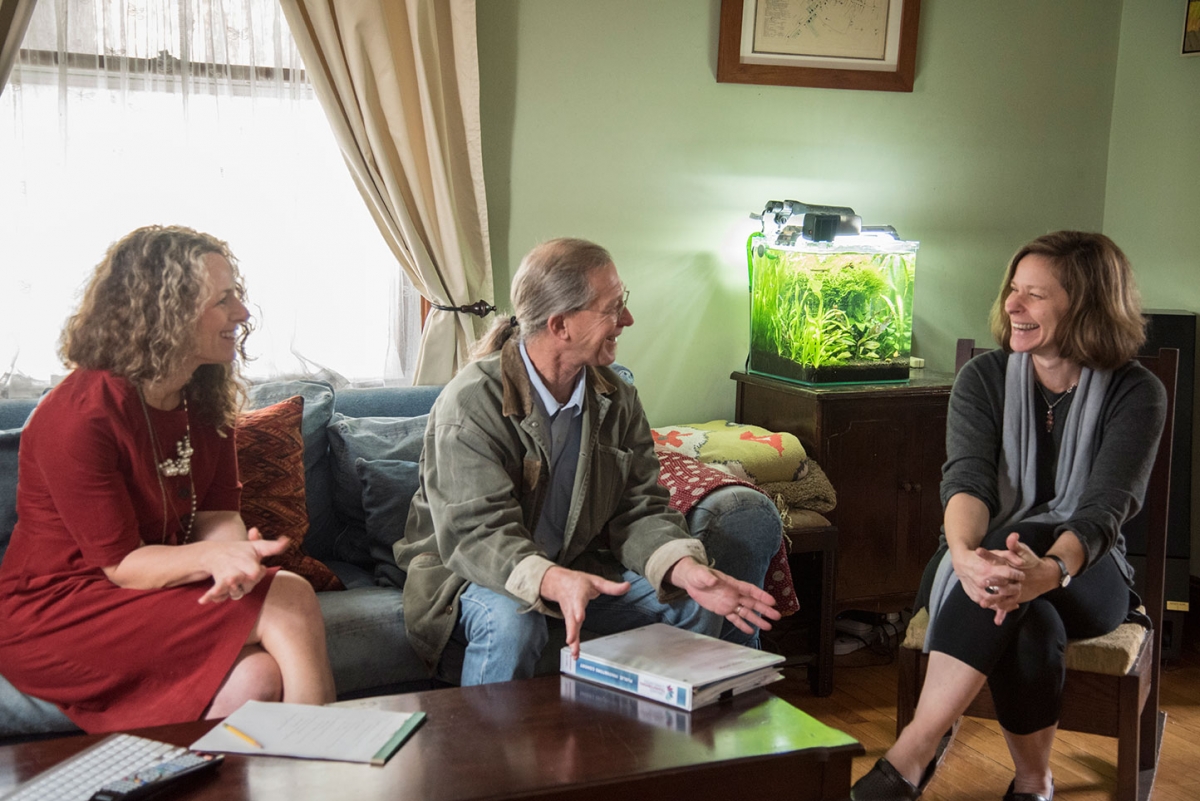 “When I’m up for re-election I usually go door-to-door,” he said. “The really nice thing about the way The Harwood Institute set up this whole program is the questions for the Ask exercise were non-political. They’ve got nothing to do with any organization, specifically, like the library or the government. You’ve got the sense that people felt very comfortable speaking in their homes, a lot of times with their kids.”

People shared many common concerns. They wanted a safer, better connected community. The town’s stoplight surfaced as one concrete way to help make that kind of community a reality.

“The stoplight was a pretty popular response to these questions,” Kovalchik said. “People wanted safe, walkable space and also a vibrant, economically viable village. The traffic light affected both the vibrancy of the village—people were just getting angry at the light—but also increasing the risks of conflicts with motorists and pedestrians.”

“While the mayor and everyone knew it [the stoplight] was a problem, I don’t think they realized to what extent people were really concerned about it,” Freudenberger said. “When we made it clear it was a priority, it became an action item. The mayor’s office got on it.”

The library’s engagement of the community resulted in laser- like attention to this issue. With support from the mayor’s office, the library encouraged people to contact their state representatives and the Department of Transportation and ask them to prioritize fixing the stoplight. The mayor made additional calls to accelerate the repair.

“It empowered people to take action and also encouraged us on the government level to put it up on a higher priority to address,” said Kovalchik. “Now it’s fixed.”

The library never explicitly publicized its role in harnessing community momentum to repair the stoplight.

“It wasn’t about saying, ‘We’re leading the charge’ or taking the credit,” said Freudenberger. “That’s not the point. The point was to make it happen.”

Freudenberger said while she thought she was Turned Outward because she had been engaging with the community since starting her role at the library, she was not. 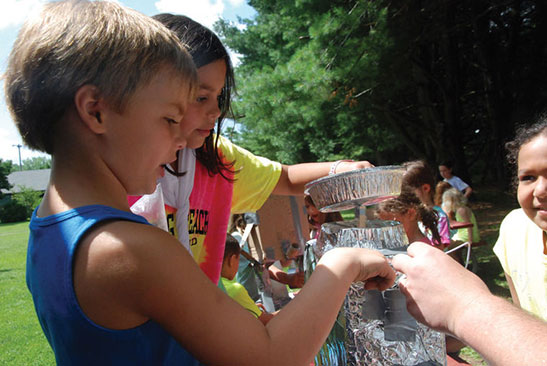 She is asking different questions now.

By the time Freudenberger and her colleagues met with other libraries at a gathering in January 2015, she realized a switch in her viewpoint had happened gradually.

“Outreach is when we go out and tell people about all the great stuff we’re doing at the library,” she said. “Engagement is going out and asking people what their dreams are for the community, then identifying what needs to happen in order to achieve those dreams.”

She listened to other library groups describe their outreach.

“I realized that [what they were describing] was exactly where we were seven months ago,” she said. “Our viewpoint had been changing, and it didn’t occur to me until that point.”

Putting the community first, as opposed to focusing first on how to promote the library, has, ironically, elevated the library.

Kovalchik said the experience of talking to residents through the Ask exercise “opened my eyes to a lot of things. We make decisions on the village level based on what we hear on the streets, but there are also a lot of assumptions.”

“When we are able to bring more people into the process, they feel they have more ownership in what is going on,” he said. “It’s a better way of working.” 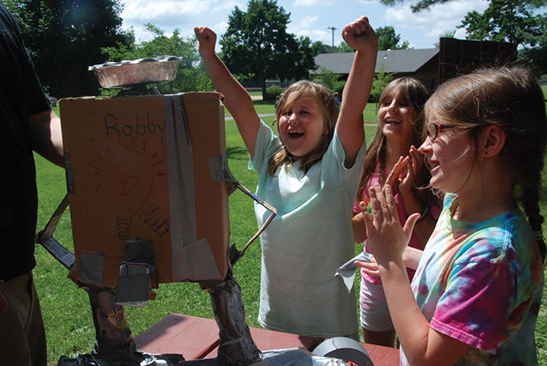 Buoyed by the momentum generated by the fixed stoplight, the LTC team is beginning to help with other issues, such as the development of a community center and offering more opportunities for young people.

Hearing residents’ concerns about a lack of activities for teens and young adults in the community, the library, Bard College and Red Hook High School teamed up to provide science, technology and programming seminars in the high school, and then on a mobile program that took the program to rural areas without easy access to the library.

Bard students host summer science camps for younger students at the Red Hook library, and the library pays their stipends. The library and college were also part of a community art exhibit meant to appeal to Red Hook’s young adults.

According to the LTC team, the library’s knowledge of the community has become the lens through which they now evaluate their choices about how to support Red Hook.
The stoplight started a momentum that transformed the library into a critical player in solving problems throughout the community. They are continuing their efforts to help Red Hook become better connected, including work on developing a community center.

At a Red Hook Together meeting in spring 2015, nearly a year after their LTC training and more than four years after Freudenberger started promoting the library at her first meeting with this group, the conversation was very different.

“Four and a half years ago, everyone was trying to imagine a place where everyone could go, and now at least six or seven of the people [at the meeting] said they wanted their organizations to be more like the library,” she said. “It was huge, a really significant shift that was a really, really cool and amazing moment. That signaled the biggest shift for our library, that the perception had changed that dramatically.”