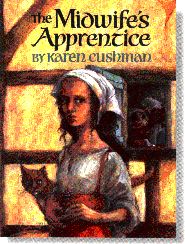 The 1996 Newbery Medal winner is The Midwife's Apprentice by Karen Cushman (Clarion Books).

"The reader is drawn in from the first sentence when the author speaks of a 'rotting and moiling heap,'" said Mary Beth Dunhouse, chair of the Newbery Award Selection Committee. "And this is when the reader meets the central character, Brat--'unwashed, unnourished, unloved, and unlovely... who dreamed of nothing, for she hoped of nothing and expected nothing.' This homeless waif becomes the midwife's apprentice--a person with a name and a place in the world. Medieval England is well-evoked, and readers wi ll find this world so compelling that they will keep turning pages to see what happens next."

"With its spare, poetic prose, What Jamie Saw is a gripping interior novel that portrays a desperate mother and her quietly heroic son as they move from an impossibly bleak situation toward a promise of hope. Coman captures Jamie's fear, his uncertainty, and his confusion, as well as his growing trust and his ability to stand up for himself."

"From its hilarious opening chapters to its shattering conclusion, The Watsons Go to Birmingham is a compelling novel that brings to life an African-American family. It draws together everyday events in such a way as to send the Watsons on a journey to Birmingham that will change them forever. In his first book, Curtis uses the devastating events in Birmingham to integrate the dichotomy of familial love and stability with the racial strife of the 1960s."

"In evocative, lyrical language, Fenner presents memorable characters and a vivid authentic sense of place in the engaging story of a bright, feisty fifth grader. Yolonda is determined to bring to light her younger brother's extraordinary talent to transform the world around him into the music he makes."

"Jim Murphy's riveting narrative of the 1871 Chicago fire thrusts the reader into the center of the raging conflagration. He weaves eyewitness accounts of the disaster with factual and social commentary, period photographs, etchings, and maps into memorable nonfiction writing."