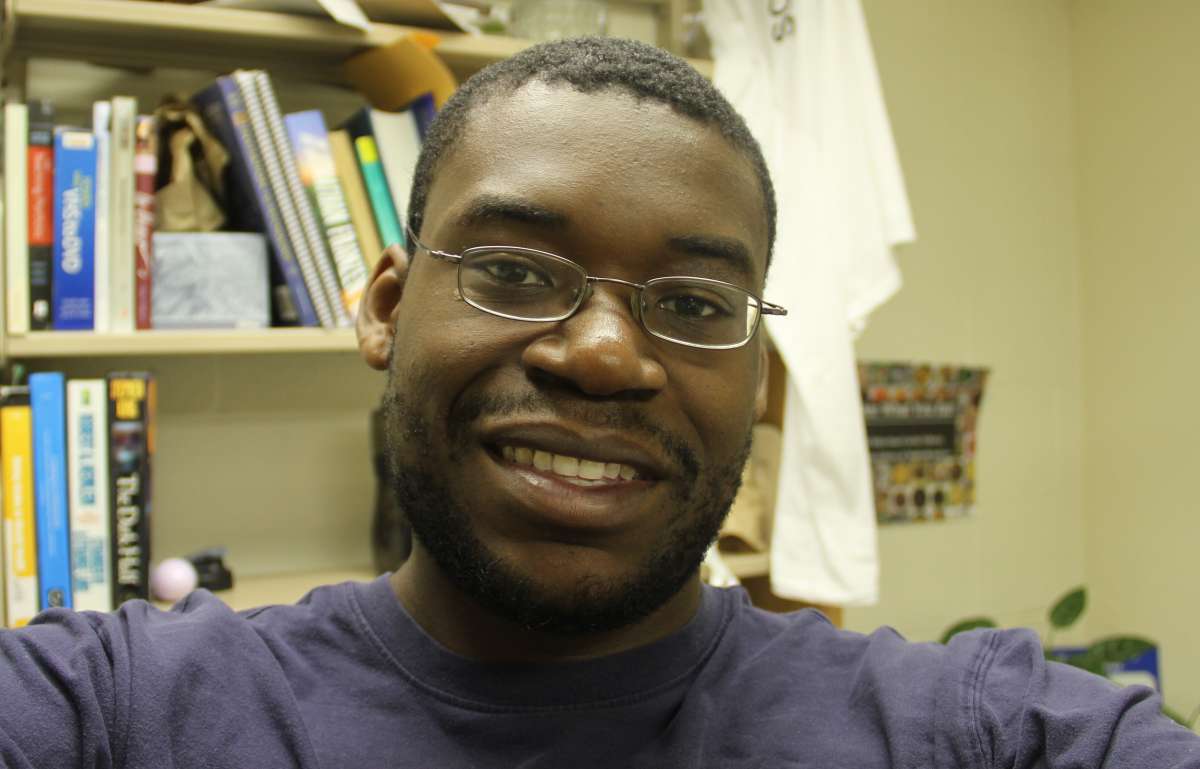 Michael Mungin (he/him/his) is a Research and Instruction Librarian serving University of Washington-Bothell and Cascadia College in Bothell, WA, about 15 minutes north of Seattle. He received his MLIS from the University of Washington in 2010 and was Psychology Librarian/Associate Professor at James Madison University in Harrisonburg, VA from 2011 to 2017 before returning to the Pacific Northwest. His core librarian duties include instruction, outreach, collections and reference. Mungin's professional interests include virtual reference assessment, EDI assessment and accountability in the library profession and, of course, media librarianship. He completely missed the boat on Spectrum 10 years ago and says it’s one of his greatest professional regrets, but he makes sure to mention it to all PoC thinking of entering the profession.

Mungin is a recipient of the 2018 Carnegie-Whitney Grant for his project An Intersectional Lens: Towards a Queer and Trans People of Color (QTPOC) Film Canon.

He is interviewed here by Anjelica Rufus-Barnes (she/her/hers), a 2016 Spectrum Scholar and member of the Spectrum Advisory Committee. She is currently a part-time Reference/World Languages Librarian at Prospect Heights Public Library District (IL) as well as a member of several local, state, and ALA committees, including the ALA Publishing Committee, which administers the Carnegie-Whitney Grant. She holds an MLIS from Dominican University and a BA in journalism from Roosevelt University.

ARB: Can you tell us more about "An Intersectional Lens: Towards a Queer and Trans People of Color (QTPOC) Film Canon"?

MM: The website presents an annotated bibliography (or, really, filmography) of the very best American films that center on stories of queer and trans people of color (QTPOC). In the vast majority of LGBTQ+ themed films, QTPOC are sidelined, one-dimensional, comic relief, or simply invisible. This site highlights some of the most exemplary films exploring lived experiences of those who have all too frequently been missing from those narratives, even as queer culture and queer media move closer to the mainstream. I hope the website will be used by library patrons seeking to see aspects of their lives reflected on screen, by those hoping to learn about the diverse experiences of others, and certainly by librarians who make collections decisions and value a diverse film collection to better serve their users.

ARB: How did you come up with the idea?

MM: Since I was a teenager, I’ve just been the biggest cinema geek. I love the movies. But it was hard not to notice how infrequently I saw anything even resembling my life reflected in the medium…and I searched hard. In the rare occasions when I did find something, I would watch those films on repeat (I literally wore out the Seattle Public Library’s VHS copy of All God’s Children, a documentary about overcoming homophobia in Black communities – I should probably apologize). I wanted to make a resource that would make it easier for librarians and library users to identify films that speak to QTPOC experiences without all of the searching in vain and disappointment that I experienced. I had known for years that the American Library Association offered Carnegie-Whitney Grants for librarians (huge thanks to them) to research and create bibliographic tools on our choice of topic. When I finally had the capacity to do this project, I seized the opportunity!

And I had a couple very helpful librarians who helped connect me with books and films that spoke to me, inspired me and gave me some sort of roadmap for my future. Without succumbing to too much “professional awe,” I think librarians and library staff really can have great influence on our users’ lives. Being a library professional can give you a platform to create and disseminate meaningful resources. That’s what I hope this project ends up being as well.

MM: The sheer volume of films was overwhelming. The “canon” consists of the 60 best examples, in my subjective opinion, but the long-list of potential films for inclusion consisted of more than 150. No matter how much of a cinephile I am, that’s a massive time commitment on top of my everyday job. Making this an annotated bibliography, rather than just a list, was important to me, but that much writing was also just a lot. There were days when I seriously questioned if this was a doable project in the timetable I agreed to.

There were also some films that were nearly impossible to find. For example, Patrik Ian-Polk, of Noah’s Arc fame, made a film called Punks that is infamously unattainable because its release was hamstrung by expensive music rights issues. Surreally, an NPR podcast, Nancy, recently did an episode specifically about how hard it is to track down that movie – I was glad it wasn’t just my own professional shortcomings. And some seminal films never even made it to DVD, much less to online streaming platforms. They’re languishing on rapidly-deteriorating cassette tapes in far-flung locations. My interlibrary loan department’s staff got to know me pretty well.

And lastly, I certainly struggled with a bit of imposter syndrome, and I still do. Being cisgender, Black, queer, and male are important aspects of my lived experience, and I understand well the pitfalls of trying to speak to the lived experiences of others. Me, by myself, looking broadly at QTPOC is difficult and sensitive business, and I worried about being disrespectful or reductive. I tried to address this head-on with a “positionality statement,” describing this limitation and why it’s important to consider. Though response to the project has been overwhelmingly positive so far, I’m really interested in what ideas or constructive criticism others have for addressing these limitations (frankly, I’d love some interested collaborators, who could add depth and context to a project like this).

ARB: What are some things that surprised you while doing this project?

MM: I was a little surprised at how uplifting it would be to do such a deep dive into films on these topics. America has such a repellant history of racism, transphobia, homophobia, biphobia, and religious intolerance in so many different contexts, that I feared these films would be kind of a crushing experience. But the perseverance and courage of QTPOC throughout the past few decades is an extraordinarily common theme that shines through in so many of these films.

Less positively, I was also surprised and disappointed at the continued invisibility of explicitly bisexual-identified people of color on the big screen. I found startlingly few examples. Biphobia and bisexual invisibility are plagues – even in queer communities.

ARB: Besides utilizing your website, how can librarians and educators increase awareness, understanding, and appreciation of QTPOC experiences?

MM: Go outside of your comfort zone and always with humility, respect, and eagerness to learn. Listen to people’s stories and experiences without projecting yours onto them. I remember trying to get friends and colleagues to see Moonlight when it came out. That film has changed the landscape of QTPOC cinema in innumerable ways, after all. Their eyes tended to glaze over, and they would talk about how they weren’t planning to see it because films like that feel like “work.” For QTPOC, the library can be an impactful and democratizing institution in a world that presents unique barriers to us. Treating our stories as some sort of burden or extra credit is the wrong way to approach this. Learn about the people in the communities your libraries and schools serve. Fill your collections with their stories and value them.

ARB: What recent books have you read that if they were made into exceptionally well-done films would you include in the canon?

MM: One of the blessings of finishing the first iteration of this project is that I actually have time to read again! I feel like I’ve missed out on a lot of the best recent books, but for sure Saeed Jones’s new memoir How We Fight for Our Lives hit very close to home and would make a powerful film. He’s learned some difficult and important lessons, sometimes in the hardest possible way. We’d all benefit from that getting a film adaptation. I was also a big fan of Gabby Rivera’s YA coming-of-age novel Juliet Takes a Breath.

ARB: What are some of your other interests, such as hobbies, etc.?

MM: I love to play and watch tennis. Let’s call it a healthy obsession. And I recently moved back to the Seattle area after seven years away, so I’ve been focusing a lot on rediscovering the city. It’s changed a ton, in good ways and in bad ways, and it’s been a trip trying to wrap my head around how this city is evolving.

ARB: What else would you like to share with our readers (e.g., something I should’ve asked but didn’t, new projects, upcoming presentations, etc.)?

MM: Support QTPOC artists and creatives! Engage them on social media. Go see their films, watch their shows and read their books. Rent and stream them, buy them, and tell your libraries to buy them. Teach them in your classes! The work they do is brilliant and personal and important, but it’s also very taxing and expensive. No matter our identities, if we want to continue seeing ourselves reflected in media, we have to make it clear that there’s an audience. Gatekeepers will always try to find excuses not to support our stories (I mean, look how Netflix treated One Day at a Time for example), but taking the “there’s no audience for this” argument away from them is powerful.

I’m taking a little break from starting any new projects now, but I’d love constructive feedback on the QTPOC Film Canon project. I hope to keep updating it, as there have been a spate of excellent films in recent times and there will be more. I hope people check it out!