2006 Recipient of ACRL's Academic/Research Librarian of the Year Award 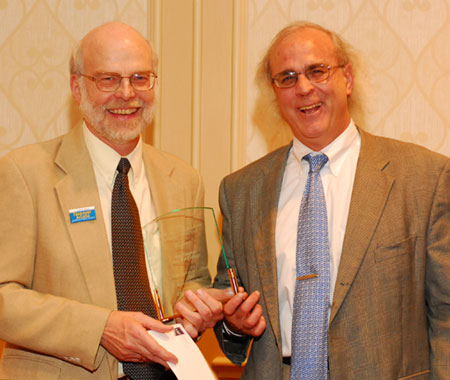 There are many people I want to thank for this award.

I want to begin by thanking ACRL itself for having established the award and maintaining it for so many years. It’s a wonderful honor to be among the many distinguished librarians who’ve received it. I also want to thank Les Canterbury and the awards committee for their work in the selection process. And I especially want to thank Yankee Book Peddler for their generous sponsorship of the award and this event.

I owe special gratitude to Deb Dancik and Bob Rose for initiating and coordinating my nomination for the award and to others who wrote letters of support, including especially members of the ACRL scholarly communications committee.

I am very grateful to Oberlin College and to the staff of the Oberlin College Library. Oberlin is a special place. It’s a college that has an intense academic and intellectual environment. Because of that, it values a strong library. Oberlin is also a place that is supportive of activism on important societal issues. I’ve been especially fortunate to work with a terrific library staff at Oberlin. It’s a group that is highly professional, that works well together, and that stays focused on what’s important – the needs of our students, faculty, and other library users. They very deservedly won an ACRL Excellence in Academic Libraries Award in 2002. Having such a terrific staff has given me a certain amount of freedom to focus on issues of national importance.

I owe special thanks to my wife Alison Ricker, Science Librarian at Oberlin, and our two sons John and Michael English. They’ve tolerated patiently the fact that I’ve spent way too many evening and weekend hours on library issues.

On a lighter note, I want to thank to Mary Reichel for winning more votes than me when we both stood for ACRL Vice President/President Elect back in 2000-2001. I say that despite the fact that I tell Mary to this day that the election went her way because of butterfly ballots in the state of Florida! Seriously, I do owe thanks to Mary and I’ll explain more about that in just a moment.

As I think about my library career, there are three things that stand out for me – in addition to having had the privilege of directing what I think is an outstanding college library.

The first is information literacy. I don’t know where you stand in terms of the debate at today’s presidential program, but to me it’s very clear that collaboration with faculty in helping students master a very complex information environment has to be one of the highest strategic priorities for academic libraries. I’m pleased that we’ve made strong progress on this issue at Oberlin, and also that I’ve been able to play a role in helping libraries in our local consortium – the Five Colleges of Ohio -- move forward on this issue as well.

The second issue that I have worked on is recruiting talented undergraduates – especially students of color – into the library profession. When I became a librarian – after first starting out on a career path that would have taken me into college teaching – I was very impressed by what a marvelous profession librarianship is and also by what wonderful people who chose to become practicing librarians. My sense of how good this profession is – and how much it’s needed by our country and our world – has only deepened over time. It’s a sad fact, though, that most undergraduates don’t even think of librarianship as a possible career. We all need to work together to change that – to make librarianship a viable first career option for talented students. Our experience – both at Oberlin and at other schools that have participated in a cooperative recruiting program funded by the Mellon Foundation – has shown that many bright young people become genuinely excited about librarianship once they see how well it fits their owns interests and values.

We’re seeing many signs of much-needed systemic change. The open access movement has made great strides and there are very exciting developments at the national level. We have a very real chance to make federally funded research publicly accessible. I want to encourage all of you to go home from the conference and fax a letter right away to your two U.S. Senators encouraging them to become co-sponsors of the Federal Research Public Access Act of 2006. And I ask you to do the same thing with your U.S. Representative as soon as a comparable bill is introduced into the House. If you’re bold about these things, send a letter to Senator Susan Collins of Maine, who chairs the Senate Committee on Homeland Security and Government Affairs, and ask her to hold hearings on the bill. If you’re the kind of person who has reservations and doesn’t normally send letters to Congress --- get over it! While you’re writing those letters grab your friends, fellow librarians, and especially your faculty colleagues – in fact any human being who can put together coherent sentences into a letter – and get them to do exactly the same thing. The Cornyn-Lieberman bill is an extraordinary opportunity and we simply
have to do everything possible to see that it's passed into law.

I want to close these remarks by acknowledging one person who is not with us – and that’s the late Bill Moffett, who was my predecessor as Director of Libraries at Oberlin. I worked closely with Bill for an 11-year period – before he went on to direct the library at the Huntington. More than anyone, Bill showed me in many tangible ways the things that a library director can accomplish – both locally and nationally – especially if he or she is willing to think big about issues and work on them with determination. It’s very fitting for me not only that Bill received this same award – but that he received it right here in New Orleans in 1993. Several people have told me that they think Bill would be somewhere smiling during this award presentation. I know that’s true, because Bill’s grin is very much present in my mind at this very moment.

Finally, I want to thank all of you for coming to today’s reception. Receiving this award has been a wonderful experience for me. It’s one that I will treasure for many, many years to come.